Geronimo Jerky are Queensland based company from Mitchelton in Brisbane’s inner north. They have been around for about 6 years now and quite active in the jerky community. They have around 8 flavours and have won numerous awards for their jerky.

This review is of 40grams of their Spicy Shaman flavoured beef jerky which is a blend of African spices with a curry influence. This flavour has previous won a Bronze Award at the 2012 Sydney Royal Fine Food Show. 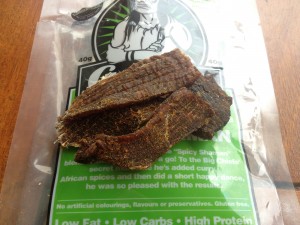 Geronimo Jerky does well with the consistancy of their product, this is definately the case with appearance. The small pieces are nice and flat and free of any fat. Being a generally dry jerky across all their flavours, this is evident in the appearance of the Spicy Shaman. The curry flavour and African spices adds a slight yellow colour to the jerky and somewhate prepares you for the taste that is to come.

As mentioned above, the colour of the jerky eludes you to the fact this jerky will have a particular curry taste, and upon first bite you are presented with a pleasant salty taste followed by a mild curry finish. I didn’t encounter any “spicy” elements to the jerky, and it is still quite a close flavour to the original  – I would have liked a slightly stronger and spicier curry flavour.  As the jerky is very dry, it breaks up and dissolves in your mouth quickly, along with any trace of the flavour. It is hard to not eat a whole packet very quickly, as the jerky is very easy to eat, and doesn’t have a very high “chew” factor which many jerky fans look for.

Once again Geronimo Jerky provides a jerky that is highly consistent. All the pieces are of equal thickness and dried evenly (although a little too dry for my likeing). The beef is of high quality with no traces of fat or other nasties whatsoever.

$6 for 40g / $90 a kg is rather reasonable and quite consistent with competitors. There is no mention that the meat used is grass fed, which should keep prices lower. As the product is drier than most, you in fact do receive more for jerky for your buck.

Geronimo Jerky Spicy Shaman is a quality product, however, it wasn’t overly spicy and could do with more curry to distinguish it from the original flavour. Overall it is a good product that is easy to eat, visually appealing and tastes good. No added nasties, good packaging and regular deals online.